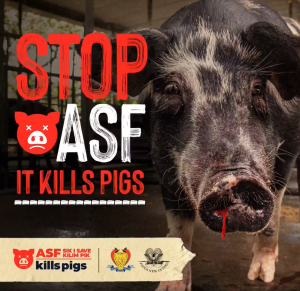 Papua New Guinea (PNG) has implemented a rapid response effort to the outbreak of African Swine Fever (ASF) in the provinces of Southern Highlands, Enga and Hela, which has significantly raised awareness of the disease and helped limit the spread beyond these declared provinces.

PNG reported the first ASF incursion in Mendi, Southern Highlands on 28 March 2020; ASF has killed pigs across the world and has no known vaccine or effective treatment. The disease poses a combined social, cultural and economic threat to PNG and PNG’s biosecurity agency, the National Agriculture Quarantine and Inspection Authority (NAQIA), took swift action by mobilizing personnel and resources to the ASF declared areas.

“The movement of infected pigs is the most significant means of spreading ASF.”

Road checkpoints were set up at strategic provincial entry and exit points around a 10km radius from the identified infected areas. Delimiting

surveillance exercises were carried out to determine the extent of the spread of ASF within and outside of declared disease areas, tracing the movement and history of sick or dead pigs, including active infections.

The centres act as emergency management hubs, which are vital to containment efforts. 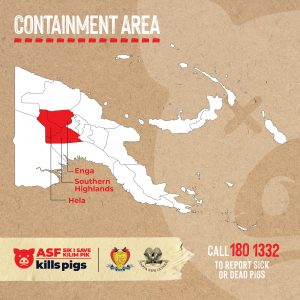 Dr. Puana said ASF remains contained in the declared Disease Areas of the Upper Highlands region. The Lower Highlands provinces including Western Highlands, Jiwaka, Chimbu and Eastern Highlands and the rest of PNG are not infected with ASF.

Movement of pigs and pork meat is allowed in these disease-free areas. But movement of live pigs is subject to clearance by NAQIA and provincial stock inspectors.

According to the Managing Director of NAQIA, Mr Joel Alu, “the response work progressed well with support from the Australian and New Zealand Governments through the Pacific Horticultural and Agricultural Market Access (PHAMA) Plus Program. The Food and Agriculture Organization of the United Nations (FAO) and the World Organisation for Animal Health have also assisted. NAQIA’s work and containment efforts have been greatly boosted by the technical support and funding from our partners, particularly through PHAMA Plus and Australia’s Department of Agriculture, Water and the Environment.”

NAQIA has now stepped up its advocacy by launching an ASF national risk communications and awareness campaign supported by PHAMA Plus. NAQIA has conducted intensive risk communications, public awareness and advocacy on ASF with communities and provincial and district administrations, addressing economic, social and gender challenges.