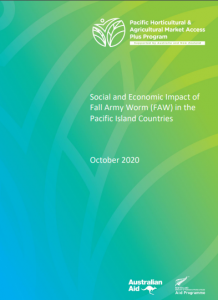 Fall Army Worm (FAW) (Spodoptera frugiperda) has been a pest of crops in Central and South America for centuries where it mainly affects maize. Beginning in 2016, FAW spread rapidly and has now been reported almost everywhere in the tropical latitudes. In late 2019 FAW was detected in the Torres Straight Islands, spreading to North Queensland during the first months of 2020 and migrating rapidly southwards thereafter. In PNG the pest was detected by a NAQIA survey team in maize at Daru in Western Province in February 2020, and has been confirmed as being the same strain as FAW found in the Torres Straight Islands and Northern Australia. Surveillance work in PNG is continuing and there are initial reports that the pest has been found along the southern coastal provinces as well as Morobe, Madang and some highlands provinces.

Following the PNG study, DFAT requested PHAMA Plus to prepare preliminary estimates of how FAW might affect the other five PHAMA Plus countries, Fiji, Samoa, Solomon Islands, Tonga and Vanuatu.
This preliminary report provides an overview of cropping systems in the five countries including both commercial and smallholder subsistence crops, and their level of susceptibility to FAW attack. This is followed by some impact assessments based on FAW outbreak scenarios of varying severity ranging from a small range of highly susceptible crops, to affecting many susceptible crops and farming systems.