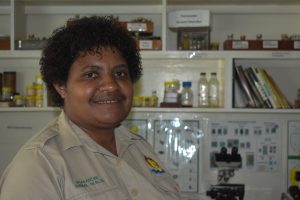 ASF killed close to 400 pigs in Mendi in the Southern Highlands Province in March 2020, prompting an immediate response from the National Agriculture and Quarantine Inspection Authority (NAQIA). The disease kills almost all infected pigs (both domestic and wild) but does not affect humans.

Strategically placed check points were set up to stop the transportation of possibly infected pork products. Pigs were also swabbed and tested for ASF, and experts were sent into remote villages to investigate and teach safeguarding methods.

Ellencia Kingal, a Technical Officer with NAQIA, was transferred from her usual laboratory work to a field team conducting tests and analysis in remote parts of the Highlands in an effort to contain the disease and protect livelihoods of rural communities.

By the time Ellencia and her mostly male colleagues reached the affected areas, community perception had placed sorcery as the cause of the sudden pig deaths.

The immediate challenge was to debunk the myths, explain the causes of ASF and bring about changes to how people cared for their pigs.

Not an easy feat for a woman in a country in which men dominate discussions and decision-making processes.

Some communities wanted the response teams to replace the dead pigs or provide compensation in return for officers taking samples or getting information from farmers.

Ellencia was under no illusions about the task at hand.

“In Papua New Guinea, especially in the Highlands region, generally women are not accepted to participate in public speaking, for cultural obligations, or, in this case, ASF awareness in public gatherings,’’ she said.

Given that it is women who spend most time with the pigs and have firsthand knowledge of the subject, a practical approach was needed.

“To cope with this, I targeted mothers and young women during the African Swine Fever response work. In Hela Province, pigs are mostly raised by mothers.’’

Ellencia found that mothers were willing to communicate with her because she was a woman.

“Mothers were very keen in knowing more about ASF, how it spreads and precautionary measures they should take to protect their pigs,’’ she said.

“Most samples were collected from mothers that I provided awareness to.’’ 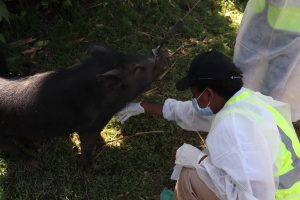 Ellencia Kingal, a Technical Officer with NAQIA, was transferred from her usual laboratory work to a field team conducting tests and analysis in remote parts of the Highlands in an effort to contain the disease and protect livelihoods of rural communities.

Because some highland communities speak in their local dialect and do not use Tok Pisin, a translator was used to allow Ellencia to talk to the women.

The information gleaned in those interviews helped trace the movement of pigs back to a wedding ceremony in which the initial infected animals were distributed.

This evidence also provided support for NAQIA’s initial response which saw checkpoints set up at strategic provincial entry and exit points around a 10km radius from the identified infected areas.

With support from the Pacific Horticultural and Agricultural Market Access (PHAMA) Plus Program funded by the Australia and New Zealand Governments, PNG’s response moved from checkpoints to community awareness.

The animal health field has traditionally been dominated by men, but women have become more involved since a government initiative in 2011.

For Ellencia, being part of the battle to prevent the spread of African Swine Fever is linked to her in an intimate, spiritual way.

“As a Papua New Guinean and a woman from the Highlands region, I feel obliged in working to help contain the spread of ASF, mainly to preserve my culture and to help my people protect their pigs to sustain their livelihood,” she said.

That has meant that despite the challenge of being surrounded by men in sometimes dangerous situations, the work must go on.

“The most challenging part is the safety of us women in the line of duty. Papua New Guinea is a land of ‘expect the unexpected’, therefore our security and safety should be considered as number one priority,” she said.

Ellenica joined NAQIA through its cadetship program in 2014 and is a graduate from the University of Papua New Guinea with a Bachelor of Science, majoring in Chemistry, Minor in Microbiology.

“Every male colleague working in Animal Health (NAQIA) is a unique being. Their character and personality are hugely different from the other. To better cope with them, I get to know everyone better (so I) feel comfortable with the team.”

“I see we women have equal rights to men and there is no barrier in achieving our goals.’’

“For now, that goal is to control and eradicate ASF in PNG to protect the national economy and a way of life.” 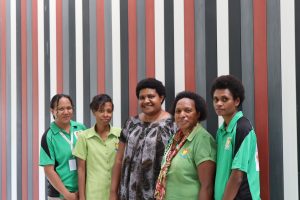