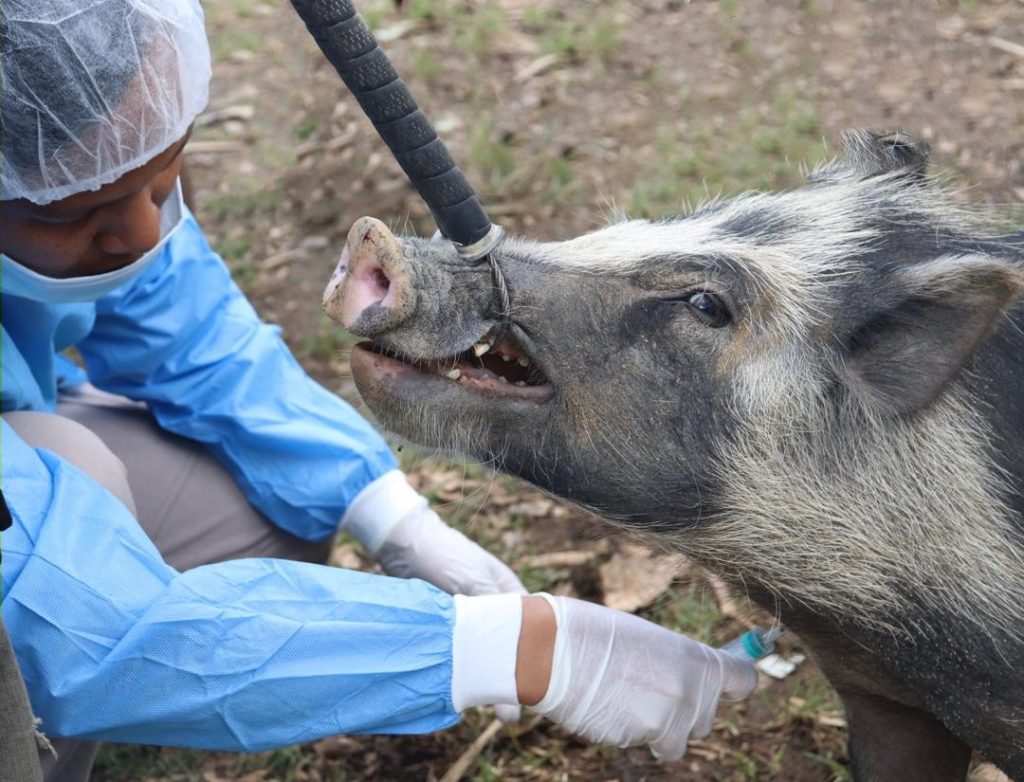 Trudging up and down the hills in Papua New Guinea’s highland provinces, Elaine Kagena is helping to contain the spread of the African swine fever – one of the greatest animal health threat to the country in years.

As a member of PNG’s National Agriculture Quarantine Inspection Authority’s (NAQIA) biosecurity team, she is helping to prevent ASF from spreading from the declared disease areas in the PNG upper highlands to the rest of PNG.

A threat which could potentially wipe out close to 3.5 million pigs nationwide costing PGK12.63 billion.

She works with local communities to help them better understand what causes ASF, how it spreads, and what people must do to stop further spread.

This work is part of the Australia and New Zealand funded-Pacific Horticultural and Agricultural Market Access (PHAMA) Plus Program’s support to the fight against the pig-killing disease in PNG.

“Awareness needs to be intensified and key messaging needs to be delivered at the level of understanding of the community,” Kagena said

“The most common reaction to ASF is that people are not aware of the disease and tend to blame it on superstitious actions.’’ 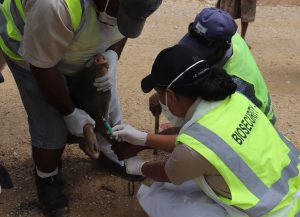 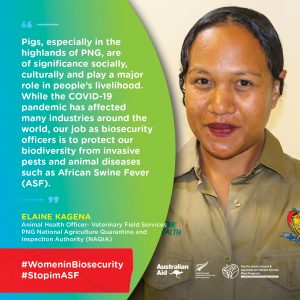 “That means using posters, pictures and talking to villagers rather than using booklets which they may not read.”

That’s not easy when she is sometimes the only woman on the team, working in remote areas where tribal fighting can erupt without warning.

“As a young mother I have to make sacrifices and leave my family because it’s all hands-on deck for these operations,’’ Kagena said.

“In these operations, women are at risk, but we serve the government and these sacrifices are made with support from our families.’’

Most highland pigs are free ranging. This poses a threat, especially if the infection spreads to wild pig populations whose movements cannot be controlled.

Convincing owners to control their pigs is not easy. To counter this, NAQIA has set up road checkpoints at strategic provincial entry and exit points around a 10km radius from the identified infected areas to prevent the movement of pigs – the most significant means of spreading ASF.

But Kagena believes that if women hear and accept the advice about keeping their pigs healthy, half the battle will be won.

In most PNG communities, men own the pigs, build the fences and provide fuel to cook food for the animals. But it is the women who care for the pigs every day.

These pigs – symbols of status and wealth – are essential to the operation of the community in weddings, funerals, graduations or as payment for goods and services.

Pigs are also widely used to settle disputes between individuals or families. 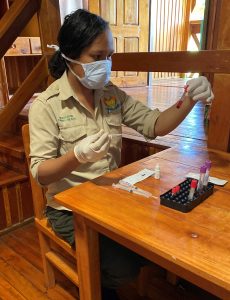 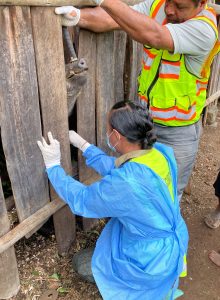 Kagena first joined NAQIA in 2014 under the Second Cadetship Program after graduating from the Papua New Guinea University of Technology with a Bachelors Degree of Science in Agriculture.

Elaine’s zeal for what she does isn’t dampened by the many challenges but instead uses it as a motivation to build herself to be seen as equal to her colleagues in the biosecurity field.

“I am faced with many challenges working in a male dominated field but despite these challenges taking the best of me, I try my best to achieve my aims, goals and perform my roles in the organization to the best of my ability to be seen as competent and equal to my male colleagues,” she said.

While most of the world focuses on the ravages of COVID-19 and its effect on economies, Kagena sees ASF as the more immediate threat to her country’s future.

And it is a threat she has been trained to address.

“Our job as biosecurity officers is to protect our biodiversity from invasive pest and disease,” Kagena said.

“Pigs, especially in the highlands of PNG, play a major role and are part of the livelihood of the people. To be able to contribute to the containment exercise is extremely rewarding in trying to protect the most valued species, and for food security in the country.”

“As a woman and a young aspiring technical officer I am privileged to work alongside some of the most knowledgeable experts and best scientists in the animal health field with local knowledge in PNG, in order to address some of the challenging situations in addressing ASF in the Highlands.’’