29 November is International Women Human Rights Defenders (WHRDs) Day. A day to celebrate and thank women who defend human rights, and all people who defend the rights of women, girls, and LGBTQI people. We acknowledge the broader work of past and present human rights defenders in the Highlands region of Papua New Guinea who are actively raising awareness on sorcery related and gender-based violence. 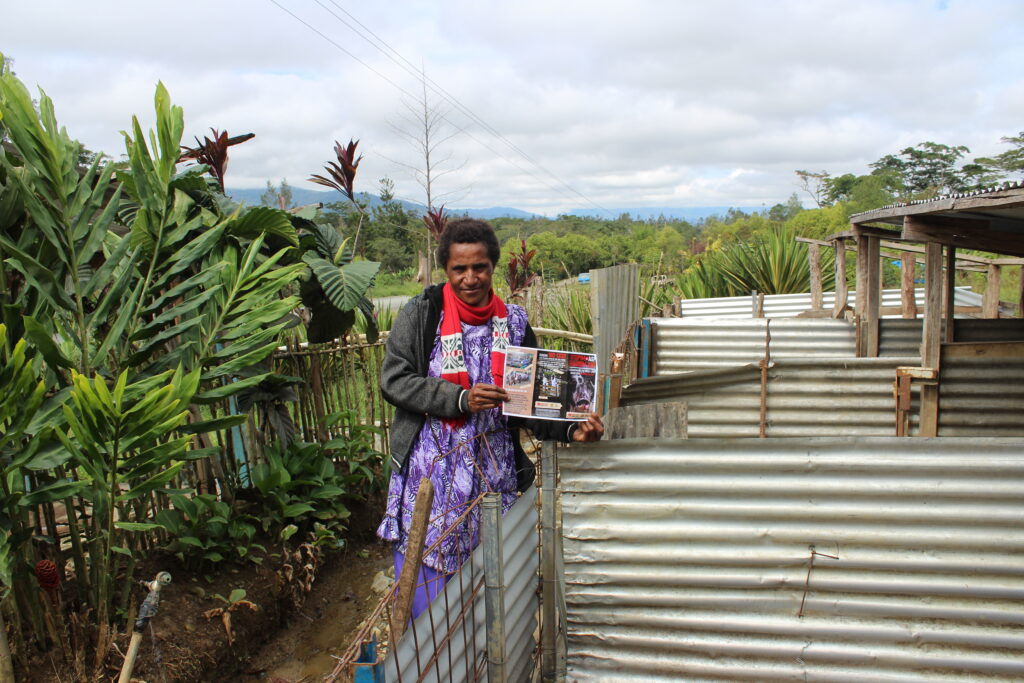 Grace Mark lost six of her nine pigs to the deadly ASF disease which kills almost all infected domestic and wild pigs but does not affect humans. Relatives and neighbours from her village and the neighbouring community also lost several pigs to the disease around October 2020.

While battling the COVID-19 Pandemic, a new animal killing disease also emerged in Papua New Guinea – African Swine Fever (ASF). Like other pig farmers in the Upper Highlands, Grace Mark in Jiwaka Province was at risk of losing her livelihood – and more.

A single mother with two children, Grace is a subsistence farmer of coffee and a semi commercial pig farmer, relying on the income from the sale of her pigs for school fees and other cultural obligations.

In most PNG communities, it is the men who own the pigs, build the fences and provide fuel to cook food for the animals. It is the women who care for the pigs every day. Pigs are a central part of PNG’s culture and are regularly traded to seal marriages or end disputes. There are serious concerns that mass pig deaths could cause social and economic upheaval in the country.

Grace lost six of her nine pigs to the deadly ASF disease which kills almost all infected domestic and wild pigs but does not affect humans. Relatives and neighbours from her village and the neighbouring community also lost several pigs to the disease around October 2020.

Initially Grace thought that her pigs were dying due to sanguma, or black magic, but then heard about a pig-killing disease in the area.

“I thought it was sanguma but then I recalled hearing about a pig illness – African Swine Fever. So, I called NAQIA and they came, checked and confirmed that it was not sanguma but an illness that kills pigs,” Grace said.

Belief in sanguma is widespread in Papua New Guinea’s highlands region. If something unwanted occurs in a village, people, most commonly women, are often accused of committing black magic, or of being a witch. They are then cast out of their homes and attacked or killed.

ASF killed close to 400 pigs in Mendi in the Southern Highlands Province in March 2020, prompting an immediate response from the National Agriculture and Quarantine Inspection Authority (NAQIA).

Disruptions to ‘land, women and pigs’ are commonly understood as the three causes of tribal conflict in the Highlands Region, and ASF has the potential to incite violence, most heavily impacting women and children, if community awareness is not widespread.

NAQIA’s biosecurity team were on the ground working with communities and pig farmers like Grace to help raise awareness of ASF to stop it from spreading from the declared disease areas in the PNG upper highlands to the rest of PNG. This work is part of the Australia and New Zealand funded-Pacific Horticultural and Agricultural Market Access (PHAMA) Plus Program’s support to the fight against the pig-killing disease in PNG.

A key part of the work was to raise awareness that ASF was caused by a virus and not sanguma. The current proactive mass information campaign has been sustained to manage sorcery related or gender-based violence.

After implementing good husbandry practices that were critical to controlling the spread of the pig killing disease beyond disease-declared areas, Grace has now championed the cause of raising awareness on ASF.

“After some time, I realized that the spread of ASF was increasing in my community. I felt obliged to share the knowledge I gained from NAQIA. When a woman in my community passed away, there was a gathering at Ples Singsing [common meeting venue at highlands villages]. I took that opportunity to go there and talk to my big brother to conduct awareness about ASF,” Grace said.

Before the ASF outbreak, the commercial value of the pigs was up to PGK4,000 per pig. Grace estimates that the cost of each pig will increase up to PGK6,000 per pig depending on the size.

She encourages everyone raising pigs, both at household or commercial levels, to implement good husbandry practices and stresses that pig deaths are caused by ASF and not black magic or sanguma.

“My pigs are now fenced with notice to members of my community to refrain from coming close to my pigs’ fence. It is my hope that this deadly virus is completely eliminated from my village,” Grace added.

Look out for your pigs being unwell and call NAQIA on 180 1332 or your local authorities to report sick or dead pigs or for more information.

*Have you experienced abuse and need help? If you have experienced abuse, feel threatened, unsafe or need assistance, please see the list of country help lines below. https://www.endvawnow.org/en/need-help

The economic threat from ASF could have potentially wiped out close to 3.5 million pigs nationwide in PNG – costing the country PGK12.63 billion, more than 3.5 billion US dollars.

There is no medical treatment to cure or prevent ASF, but we can all help eliminate ASF, by practising good farm biosecurity: