Saving the piggy bank – No limits for Josephine

Josephine Inguba, an Animal Health Officer with NAQIA, was moved from her clinic in Lae and placed in a multi-faceted response team deployed to affected provinces to conduct tests, raise awareness and contain the disease from spreading further.

When African Swine Fever (ASF) was first reported in the Southern Highlands Province of Papua New Guinea early this year, authorities feared a run on the “banks”.

In much of the highlands, pigs are banks. Pigs represent wealth, savings, and investment.

ASF kills almost all infected pigs and is a threat to this “piggy” bank.

With an estimated pig population of 3.5 million – worth an average PGK 3,000 each, ASF – with no known cure – poses a PGK 9 billion threat to the economy.

Josephine Inguba, an Animal Health Officer with NAQIA, was moved from her clinic in Lae and placed in a role usually performed by men.

In a land of over 800 languages, it was not easy to pass on the message that pig movement – the most significant way of spreading ASF – must be controlled.

“Pigs are associated with customary obligations, between villages or clans or tribes, it has caused a lot of movement, resulting in the spread of disease,” Josephine said.

“We had to raise awareness about stopping movement of pigs. So, a local district livestock officer had to translate my interview questions to pig owners.’’

Josephine faced the additional challenge of convincing pig owners that moving pigs and pig products spreads ASF. Pig owners, particularly in the highlands, are dependent on their animals as payment for goods and services or as settlement of debts with neighbouring clans.

That means changing the mindsets of communities in which pigs are the central means of revenue, savings, payment, and investment.

For this to happen, change must be led by the leaders themselves. 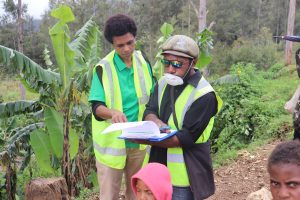 “The most influential leaders in respective communities should do awareness on changing mindset of people especially regarding slowing down using pigs for cultural purposes until all is well,” Josephine said.

ASF is a viral disease that only affects domestic and wild pigs and does not affect humans. It is not caused by Sanguma or black magic and there is currently no known cure or effective treatment for the disease.

Papua New Guinea’s battle against ASF has been supported by the Australia and New Zealand supported Pacific Horticultural and Market Access Plus (PHAMA Plus) Program, working closely with NAQIA in its response, awareness, and containment efforts.

Recognising the special links between women and the care of pigs in highland communities, special care was taken to introduce women agriculture officers to the ASF battle.

That brought new challenges for Josephine and the other women who conducted field tests and advocacy work in the communities. In some villages, their views were rejected outright by the men.

“Working in a male dominated field is challenging, however, I do my best to be equal to my male colleagues,” Josephine said.

In the field, Josephine and her female colleagues leave their children at home to carry out their duties.

“As a woman and a mother leaving my family to serve the government in this ASF operation is a challenge,” she said.

“I am privileged to work alongside some of the experienced scientists in animal health to contain this disease in the Upper Highlands. The most rewarding part of the job is finally being noticed that I am actually a field officer and not someone sitting around in the office doing paperwork.’’

For now, Josephine is happy to be able to serve the country. 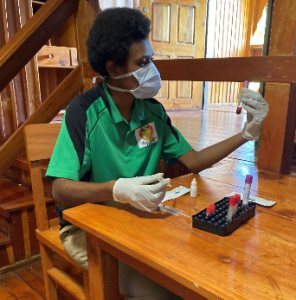 “I encourage all young men and women to get educated and give back to your communities regarding all aspects of life.”

Once the field work ends, however, the data collected by Josephine and her colleagues will allow a better understanding of current and changing trends in pig farming systems and farmer perceptions.

This will be essential for protection of pigs and the development of an industry which contributes directly to community, district, provincial and national development objectives of food security, wealth creation and rural prosperity.